I am a huge fan of W2AEW's YouTube channel. Alan is extremely knowledgeable, and also has the rare gift of being able to teach complex subjects and make them understandable. Some time back in video #88, he showed off a pulse generator circuit using a 74AC14 hex schmitt inverter. One of the gates is used to create an oscillator, while the remaining five gates are used to drive a square wave with an extremely fast edge into a 50 ohm load. Alan used this circuit in a time domain reflectometer configuration to measure unknown lengths of coax.

The fast edge generated by the 74AC14 is the key. It allows easy visual analysis of the reflection for measuring the travel time. However, a good impedance match must be made to the load in order to prevent ringing and maintain the integrity of the edge. Alan made a hand-built prototype of his circuit which performed incredibly well, giving rise times around 1.9ns and fall times under 600ps!

Recently, one of Alan's viewers designed a PCB for the pulse generator circuit. Marcus created a very nice through-hole design that makes assembly of the circuit so much easier. Alan tested the board in video #203 and it gives excellent performance, matching or exceeding the original prototype.

I decided to create my own surface mount version of the board. An SMT layout significantly reduces trace/lead lengths and overall dimensions, reducing inductance and (hopefully) making the circuit even faster. I made only a few modifications to Alan's original circuit. First, I used 249 ohm resistors on the output to slightly improve the impedance match. I found some inexpensive 249 ohm 0805s on Digikey, so this was an easy choice. I also added a large 47uF tantalum capacitor. When I did the layout, I placed it directly at the supply pin of the IC. I hoped that this would stabilize the supply rail during the edges and help with the ringing Alan saw.

I designed the PCB in Eagle. I have been learning quite a bit about PCB design during my summer break from school, so a little high speed layout was a fun challenge to take on. Here's what I came up with: 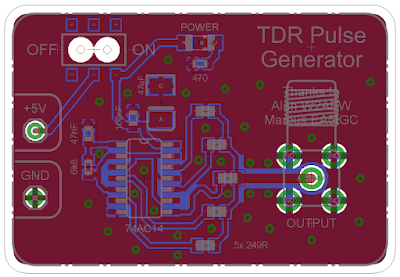 After a couple weeks I had the boards back from Oshpark. Almost all of my boards these days are SMT so assembly was quick and painless. It looks quite nice I think! 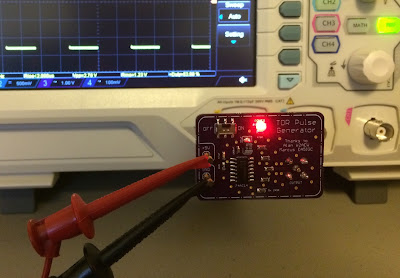 I connected it to my Rigol DS1074Z to do some quick testing. The frequency came in at around 3kHz, which is much lower than Alan experienced with his version. While I could see that the edge was quite fast, my scope simply doesn't have the bandwidth needed for measuring such fast rise and fall times. A bit of ringing remained unfortunately, despite my modifications to the circuit. 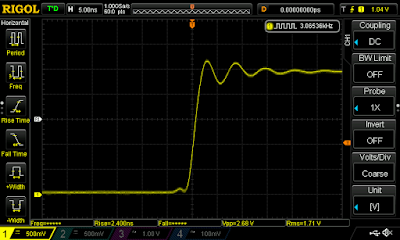 When I ordered the parts from Digikey, I also picked up some 74LVC14 ICs. The 74LVC series is newer than the AC series, and has some marked improvements. Wide supply voltage range, high output current drive, and most importantly, these chips are FAST! I assembled one of the boards with the LVC device for testing purposes. But now I needed a faster scope...

I drove onto campus and found a very old HP 500MHz scope in one of the supply rooms. I really wanted to use the high bandwidth LeCroy, but it was set up for an experiment and I didn't want to disturb it. The HP scope wasn't the greatest, but it would do for an initial test. These are my measurement results:

The rise times are quite nice, especially the sub 1ns rise on the 74LVC14! I expected this device to be faster, and I was not disappointed. I'm not sure why the fall times are higher than Alan got in his videos. Perhaps it was a limitation of the instrument. I would really like to see him test this board on his nice 1GHz MDO for a direct comparison.

Before wrapping up, I should bring this back to the original intent of the circuit. Despite the drive for faster and faster edges, this board as-is works incredibly well in a TDR configuration. The 74LVC14 version on my scope gives a very clean edge with almost no ringing. I used it to measure a length of RG-58 I pulled out of the junk bin, and my error was less than 1 inch for a 12 foot cable! This is more than good enough for use in the shack.

There's more to do on this project. I still want to tackle the ringing issue. I also plan to stick with the LVC device as it gives better performance. After I get some new boards in, I will find time to put them on a good high bandwidth scope and really take some accurate measurements. When I am satisfied with the final design, I will share it on Oshpark so that others can make this SMT version of Alan's pulse generator if they wish.

Also, this is my first blog post! I've needed to start a blog for some time to record my projects. I have many in the works, mostly focused on RF and precision time/frequency. I hope to post here regularly.