This post will explain how to tap into the 10MHz test point signal in the REF-1 unit of the Lucent KS-24361, aka HP/Symmetricom Z3812A. I describe what is needed to route the signal to an external connector, and how I modified my own REF-1. 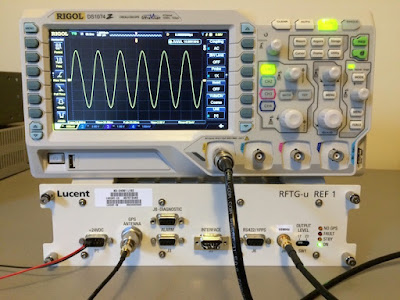 My REF-1 unit running standalone with a 10MHz output on the front panel.

The KS-24361 GPSDO consists of two separate boxes. The REF-1 unit has the Motorola Oncore GPS inside and runs the show. The REF-0 box has its own OCXO and is used for redundancy. However, the REF-0 also has a useful 10MHz output, which the REF-1 does not have. For this reason, the KS-24361 is often run as a complete set, with both boxes powered up. One for the GPS, and one for 10MHz. This is quite wasteful of power, as both boxes consume about 15 watts continuously. Also, it wastes the very nice Milliren OCXO in the REF-1, which sits disciplined but unused with both boxes running.

I decided to remove and examine the board in the REF-1 to try and find the 10MHz signal. Instead of the 10MHz test point that the REF-0 has, the REF-1 uses this spot on the front panel for the GPS antenna connection. On the board, the unpopulated position for the 10MHz SMA is directly below the TNC connector for GPS. One or the other got populated, depending on whether the board would end up in a REF-0 or REF-1.

I figured that the 10MHz and 15MHz signals would be generated closer to the 15MHz connector, since that is the primary output. I also assumed that the center pin of the 10MHz SMA would have to go to unpopulated pads for a resistor or coupling capacitor. I started toning out unpopulated pads near the 15MHz side of the board and quickly found the source.

The 10MHz test point on the REF-0 is driven by U206, which is a 74ACT14 hex schmitt inverter. Three gates on the IC drive the output, each through separate 100 ohm resistors. The resistors feed a common trace which goes all the way to the other side of the board and the 10MHz TP output. There is also a position for a capacitor, which is used to form a low pass filter for the 10MHz TP. (I don't know what the value of that capacitor is normally. Perhaps ~100pF.)

On the REF-1, the three resistors and the capacitor are unpopulated. As far as I could determine, these four missing passives and the missing SMA connector are all that prevent a REF-1 from having the same 10MHz output as the REF-0. 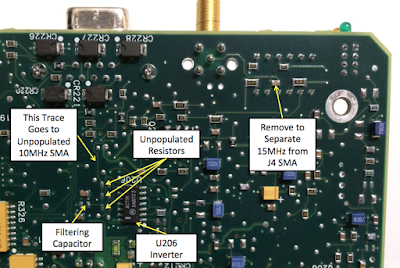 Relevant locations on the REF-1 mainboard for accessing the 10MHz test point signal. Also shown is the output coupling capacitor for the 15MHz output (J4).

To access the 10MHz signal at U206, you will need to completely remove the board from the housing. That's a LOT of screws. Everything on the front panel needs to be undone, including the annoying securing screws for the DB connectors. (They all have blue Loctite by the way) Once you get the top case off, you need to remove the Oncore GPS. That takes four screws, then you can carefully pull it up and off the board. After that, there are seven or eight screws securing the board to the bottom case. Remove those, then carefully wiggle the board backward and out. It will get hung up on things on the underside, so have patience. Don't flex your board too much doing this; you don't want cracked solder joints all over.

Look at the underside of the board near the 15MHz SMA connector. Find U206 as shown above, and the pads for the unpopulated resistors and capacitor. At this point, you can tap into it as you see fit. You could re-create the normal 10 MHz TP signal, or use filtering for a sine wave. Luckily, it seems that it is unnecessary to buffer this signal. U206 is already doing that.

Once you have decided how you want to tap the signal off of U206, you will then need to get that to the outside of the unit. Remember, you can't use the normal spot for an SMA, because it is physically covered by the GPS antenna connector. There are many options, including drilling a hole in the front panel and mounting your own connector.  You could also separate the 15MHz output from the J4 SMA and send your 10MHz there. An easy way to do this is to remove the final output coupling capacitor highlighted above. Then you will just need a small piece of coax to get the signal to the J4 connector. You can easily solder to it on the underside of the board.

I first tried re-creating the stock 10MHz test point output to see what it would look like. I populated three 150 ohm resistors and a 100pF capacitor to the pads mentioned above. Then I removed the output coupling capacitor to J4, and routed the signal there through a small piece of coax. The result looks pretty similar to the 10MHz output on my REF-0. Here it is being driven into 50 ohms: 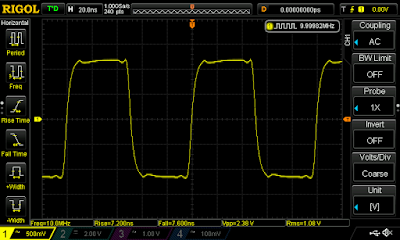 The normal 10MHz TP signal re-created on the REF-1.

For my own unit, I decided to use low pass filtering and some attenuation instead of the standard circuit. I once again sacrificed the 15MHz output and sent the signal to the J4 SMA. The result is a 1Vpp sine wave into 50 ohms. This is just about perfect for my needs. 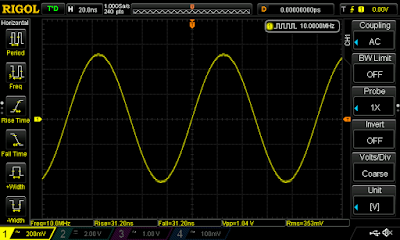 The 10MHz sine output I added to my own REF-1 unit.

I re-assembled my unit after this modification to test it. I also found a bare DB15 connector and soldered together the necessary pins on it for standalone operation. With that inserted in the J5 Interface connector, there is no special procedure to power it up standalone and get 10MHz out. I just hook up power and the antenna and let it do it's thing. Externally, the end result is quite tidy. After an hour or two of settling, the output was less than 1ppb out.

Being able to add a 10MHz output to the KS-24362 REF-1 is very useful. What I have shown here is how you can re-create the normal 10MHz test point signal that exists on the REF-0. There are certainly other ways you could do it. You might be able to trace back from U206 and find a cleaner source of 10MHz. Then you could filter that to produce a 10MHz output just as nice as the normal 15MHz primary output. When I have time, I plan to explore that approach.

I hope this information was useful to you.