I benchmarked some Arduino 32-bit boards, including an Arduino 101, Arduino Due, Arduino Zero clone, and a chipKIT Uno32. I threw an Arduino Uno into the mix for comparison. Here are the results. 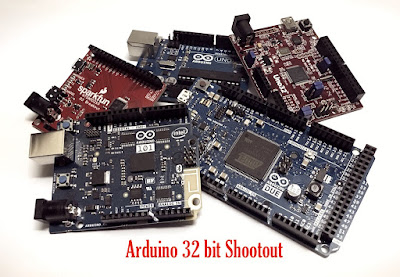 To benchmark these boards, I used an excerpt from the Arduino Show Info program. The sketch includes several speed tests that examine GPIO manipulation speed and raw computational speed. While each of the 32-bit boards tested is very fast, optimization in the IDE also comes into play when measuring performance. Even a 84MHz processor won't make up for poor code structure and inefficient register manipulation in the libraries. So instead of just comparing specs, let's put each board through tests that measure completion time of commonly used program functions.

Please examine this program to see exactly how each  test is structured.

Here are the benchmarking results. Each data point is the time to completion of the test in microseconds. Faster is better. The fastest board in each test is highlighted in green. I also highlighted two concerning results. Two of the tests could not be run on two of the boards due to compilation problems, as indicated. 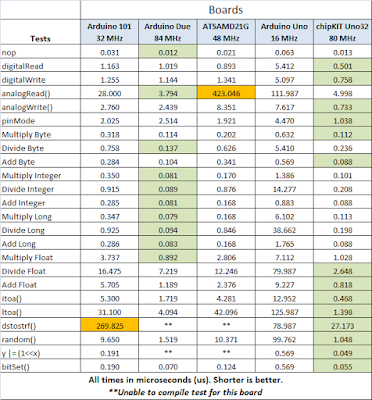 The results of the speed tests.

The Arduino Due and chipKIT Uno32 were the clear winners here. Despite the release of newer Arduino boards, the Due can still hold its own in raw computational speed. There is no doubt that it will be relevant for some time to come with its SAM3X8E microcontroller and large number of GPIO. The dark horse in the test, the chipKIT Uno32, did extremely well. In fact, I have to say it was the winner. It had very fast and consistent GPIO manipulation speed, awesome floating point performance, and it was nearly the equal of the Due in integer math. How much of this is due to the microcontroller versus IDE optimization? I cannot say. But hats off to the creators of that nice little board. It seems to be discontinued, but you can still find it for sale at about $15 cheaper than a Due!

The Arduino 101 did pretty well considering the lower clock speed. It is not a "Due killer" and was never intended to be. While the raw computational speed isn't as fast as I was hoping for, we may see improvements for this board as the IDE is optimized and we get access to the RTOS under the hood. Also, keep in mind that speed is only part of the story. Do any of the other boards have Bluetooth and an accelerometer on board? No. As a potential Arduino Uno successor, the Arduino 101 is a good addition to the lineup.

Speaking of an Arduino Uno successor, the Arduino Zero has been billed as just such a board. I don't have an official Zero, but I did test Sparkfun's take on it, their SAMD21 Dev Board. Sadly, I was a bit disappointed. Sure the SAMD21 chip turned in some good numbers, but I feel that the Arduino Zero is too expensive for what it offers. It is slightly more expensive than a Due with lower performance and less GPIO. With the Arduino 101 out at $25 less in price, where does the Zero fit in? Less expensive Zero-compatible boards might be good alternatives if you want to explore the Cortex M0+ SAMD21 microcontroller.

The Arduino Uno rocked it! Well, ok, it looks pretty slow compared to the other boards. However, remember that it is extremely unfair to pit an 8-bit microcontroller against modern 32-bit devices in speed tests. The Uno still has enough processing power for the majority of hobbyist projects. It is a classic board that will be around for years to come.

There were two concerning results that I highlighted on the table. Analog read performance on the Arduino Zero clone is abysmal! There has to be something wrong in the IDE there. Nearly half a millisecond to read an analog pin is unacceptable. Hopefully it will be fixed in the near future. Also, dstostrf() speed on the Arduino 101 was far too slow. Once again, this has to be due to optimization problems in the IDE. That is not a commonly used function so I doubt many people will notice.

That's it! I hope you found this shootout useful. Download the sketch above and benchmark your own boards and microcontrollers, it's a lot of fun.

If you would like to see a similar shootout with small AVR, PIC and ARM microcontrollers, such as the ATtiny and STM32F030 devices, please post in the comments below. Also post any comments and corrections.