Helping Your Feathers Flock Together

This post is about the Adafruit Feather line of microcontroller development boards. It will serve as a guide to cross-Feather compatibility when designing both hardware add-on circuits and software to work with all of the Feather variants. 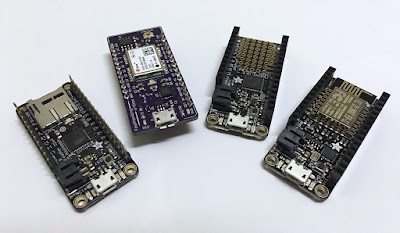 Occasionally I see a new product or microcontroller development board that really sparks my interest. That's what happened with the Adafruit Feather line of boards. They pack a lot of punch into a small footprint, especially when you consider the fact that LiPo charging is built-in, as well as Wi-Fi, Bluetooth, or an SD card on some of the variants. Adafruit is also releasing expansion boards called FeatherWings, which are like Arduino shields or Beaglebone Black capes. I immediately had a project idea involving GPS and data logging, but the GPS FeatherWing wasn't out yet. So, I fired up Eagle and designed my own.

I designed a FeatherWing using the U-Blox NEO-6M GPS module. I've used it many times before in other projects, and it's very easy to work with. It fit perfectly on the board along with it's supporting circuitry. I had some space left over, so I decided to add a sensor. On one version of my board I had a simple temperature sensor, and on the latest version I have a 3-axis accelerometer. When I designed this board, the Feather 32U4 (basically a smaller Arduino Leonardo) was the only one out, and not a single FeatherWing had yet been released. I had to make some guesses about compatibility in the pinout. Well, my board works great with the Feather 32U4 and it's Adalogger cousin.

But... I have had to make some changes to support the recently released Feather M0 and Feather HUZZAH (ESP8266). It's clear that Adafruit had to make compromises to fit so much hardware on such a small board, and this is very apparent when you start looking at the pinouts. Not all of the standard Arduino digital pins are broken out, and some have dual functions. The HUZZAH in particular has several pins that have to be used in certain ways or avoided all-together to prevent bootloader problems. Below, I will document what I discovered and list my recommended pin usage for your projects that will work with any of the currently-released Feather boards. It's an important consideration when soldering your proto-board connections or designing your own PCB that will of course have a fixed physical pin arrangement.

Serial communication on the Feather 32U4 is pretty simple, and your Arduino projects can probably transfer straight over. You have the hardware UART on pins D0 and D1. Also, you can use SoftwareSerial in the IDE to turn other digital pins into serial pins. On the M0, things are a little different. SoftwareSerial is not (currently) supported. However, you have several SERCOMs available that can act as hardware UARTs. They are somewhat documented in this post on the Arduino forum. Great! Right? ...

Unfortunately the SERCOM pins don't line up well with the usable pins in SoftwareSerial for the Feather 32U4 (basically a Leonardo in the IDE). For example, SERCOM1 uses pin D12 as RX, but that is not a possible RX pin in SoftwareSerial on the 32U4.

Serial communication is once again different on the HUZZAH. You do have the hardware UART that lines up with pins D0 and D1 on the M0/32U4, but you should really (really) leave that one alone. It's connected to the serial bridge, and you don't want USB traffic interfering with your serial-connected device or vice versa. There is a second hardware UART in the ESP8266. It's documents on the github ESP8266/Arduino page, but you can see just the relevant part in this post on the ESP8266 forum. That UART would work fine with a 32U4-compatible pinout, but doesn't work with the SERCOM pinout on the M0.

So what to do if you need a second non-USB UART? My recommendation is to use pin D10 on the 32U4 and M0 (pin #15 on HUZZAH) as a second serial RX. That will work with the M0 SERCOM and 32U4 SoftwareSerial, and there are some SoftwareSerial-like libraries out there for the ESP8266 (1, 2, probably more...) that should work for your project. For the TX line, I recommend implementing a jumper in your circuit to select between pins D11 and D12 (pins #12 and #13 on HUZZAH). Select the pin D11 jumper to use the SERCOM on the M0, and select the other jumper for 32U4 and HUZZAH.

You really can't find a common interrupt pin that will work on all of the Feathers. That is kind of a bummer. If you need interrupts, I recommend designing around the M0 or HUZZAH. As a fall-back if you hook your circuit up to a 32U4 Feather, you can use a while loop in the main loop to watch for the pin level to change. That's far less useful than an interrupt, but it might get you by for your project.

Analog input on the 32U4 and M0 is super easy. You have the standard A0 through A5 pins we are all familiar with from the Arduino boards. (A0 on the M0 board is also the DAC output!) There are other analog inputs possible on some digital pins. The HUZZAH is very different though. There is only a single analog input (at the A0 pin position), and very importantly, it has a MAXIMUM input voltage of about 1 Volt. That limits it's usefulness when designing for cross-Feather compatibility. You could use a voltage divider to drop the input voltage to a safe level, but that will likely limit your resolution on the 32U4 and M0 boards unless you can tolerate a different analog reference voltage (AREF).

There are some things to be aware of on the digital pins of the Feather boards. Pin D9 on the 32U4 and M0 should be avoided, because it is connected to a resistor divider to read the battery voltage. Also, pins D2 and D3 on the 32U4 board are in the same positions as pins 20 and 21 on the M0 board. That's because they are the I2C pins. I would suggest reserving those pins for I2C instead of wasting them on digital I/O. There seem to be lots of cool official FeatherWings coming out that use I2C exclusively to add functionality.

Digital I/O on the HUZZAH is once again very different. The pin numbering is different from the 32U4 and M0 boards, so it makes it difficult to refer to particular pins between the variants. Some of the pins are used in the bootloading process. You can read more about it in the official Adafruit tutorial. Long story short, just avoid pins 0, 2, and 15 if possible. You can use them as outputs as suggested in the guide, but you also need to consider the state of the pins on initial boot-up. I noticed some very strange behavior on my FeatherWing board when trying to use those pins, and certain connections would completely prevent programming or booting of the board. Three good digital I/O pins to use are #14, #13, and #12. However, those are also used for hardware SPI (and connected to the SPI pins on the opposite header). You might have to sacrifice SPI in order to get some "clean" digital pins for your project on the HUZZAH.

What does it all mean?

Wow, that was a lot of information. If you examined all of the links I posted, you'll see why I hit so many roadblocks in finding a good cross-compatible pinout for my FeatherWing board.

My over-arching recommendation is to pick one Feather and design around it. That will help you extract the most from the available pinout. However, the point of this article is finding a cross-Feather-compatible pinout so you can swap your circuit or custom FeatherWing between boards.

So, let's summarize the key points and mention some other tidbits:
Summary

I hope the information I have presented here is useful for finding a pinout for your project that will work across all three Feather boards. Again, I would not suggest going that route if you can avoid it. Pick one Feather and design around it to get the most from the I/O pins. However, if you really want a circuit or custom FeatherWing that works on all three AND uses several types of I/O, there are a lot of things to watch out for.

As always, the official Adafruit documentation about Feather should be your main resource. Please post any comments and corrections below.